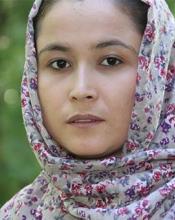 Bachelor of Science in Leadership

Mountainous Bamyan Province in central Afghanistan, home to about 100,000 people and also to the ancient Buddhist statues notoriously destroyed by the Taliban in 2001, is some 7,000 miles distant from Creighton University.

That vast barrier, encompassing the Atlantic Ocean, all of Europe, Africa and the Middle East, did not prevent Ferishta Sardary from enrolling in Creighton’s Bachelor of Science in Leadership program even though she has never visited the United States.

It was in Bamyan Province where Sardary earned a diploma in liberal studies with a concentration in business through the combined assistance of Jesuit Refugee Service and the Jesuit Worldwide Learning program, which in 2013 established a Bamyan center under its former name of Jesuit Commons: Higher Education at the Margins.

The diploma, which was earned through Regis University in Denver, a Jesuit school, qualified her for a scholarship to pursue a Bachelor of Science in Leadership at Creighton.

“After I finished my diploma, Jesuit Worldwide Learning offered a scholarship for me to continue my education, and that is how I joined Creighton’s leadership program,” Sardary says.

“I was not a refugee, but in Afghanistan, Jesuit Refugee Service works not only with refugees but also with students who live in remote, far-off places who do not have much educational opportunity, who don’t have good access to schools, or don’t have good facilities to study.”

Jesuit Worldwide Learning, which is headquartered in Geneva, Switzerland, marshals the resources of Jesuit educational institutions across the globe to provide online opportunities to impoverished areas of the world. In 2018, the Creighton Global Initiative provided 20 scholarships for its Bachelor of Science in Leadership to graduates of the JWL/Regis diploma program.

Sardary holds one of these scholarships.

It was the latest contribution from Creighton, which has maintained a relationship with Jesuit Worldwide Learning since 2013, providing instructors for its Diploma in Liberal Studies, scoring admission essays, conducting interviews for the diploma program and providing an online training program for teachers of JWL’s Global English Language program.

Afghanistan being 10½ hours ahead of Omaha makes for creative scheduling, but Martha Habash, PhD, professor of Classics at Creighton and the USA academic director for JWL, said it can be made to work.

“Ferishta has had a number of different professors, and some of them have Zoom conferenced with her,” Habash says. “I Zoom with the JWL students twice annually but see many of them who work for JWL monthly.”

The JWL program requires its beneficiaries to use the knowledge they acquire to enhance educational opportunities in their native lands, thus multiplying the impact of Jesuit outreach. To meet that requirement, Sardary and two other teachers manage a JWL Community Learning Center in Daikundi Province, where she grew up. There they teach JWL’s Global English Learning program (GEL), which was introduced in 2018.

Sardary says the school currently has 110 students enrolled with another 106 enrolled in a pre-GEL program.

Speaking from a classroom via Zoom, Sardary said a knowledge of English has become critical for Afghans seeking higher education or who seek involvement in the wider world.

“These days to get in a university you really need an ability to speak English,” she says. “They also use it in their daily lives to find information and to get jobs. They are also eager just to generally understand things in English.”

Daikundi Province, where Sardary’s school is located, is one of the poorest regions of Afghanistan, a nation that is itself ranked among the poorest nations in the world on the United Nations Human Development Index and where UNICEF reports 3.7 million children do not attend school, 60% of whom are girls.

The seed planted by Creighton University and its Jesuit partners is sprouting in important ways.

Graduates of the Regis University diploma program, together with students enrolled in Creighton’s Bachelor of Science in Leadership program, have now formed a Non-Governmental Organization named New Horizon. All of its members come from Daikundi Province and will serve as the local partner for implementing JWL education centers there.

In addition to the two Jesuit global missions, Sardary credits her family with encouraging her to pursue her educational goals, an encouragement she said is not certain in a nation where traditional cultural values do not emphasize the value of educating girls and women.

“My family has been very important,” she says. “They have allowed me, as a girl, to study and they have encouraged me to do what I like to do. There are other girls whose fathers and mothers do not allow them to do that, because of cultural problems and because they think, very traditionally, that if girls go out into society it will be not good for their families.

“My father never took the position that his daughter should not study.”