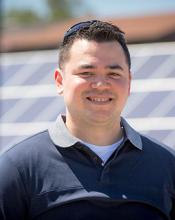 ­­After spending more than a decade as a defense analyst in the military, Jason Black decided to earn a bachelor’s degree, enter the contracting world and make his home on the east coast. But before long, he realized the position he truly wanted would remain out of reach until he had years more experience under his belt. He didn’t want to just “keep grinding away” in the meantime.

Looking for a new way to make a positive impact in the world, health care seemed like a natural choice. Black decided he wanted to study nursing and become a nurse practitioner.

He shadowed emergency room nurses to learn about the profession and sought their advice about where to earn his degree; they spoke highly of Creighton. Black applied and was accepted as a pre-nursing student.

As an incoming student, when he was researching the University further, he found another area that unexpectedly piqued his interest – sustainability.

Just to learn more about the sustainability energy science major, he and his adviser, Laurie Galeskie, met with Larry Hopp, PhD, the energy technology program director. Hopp suggested that Black take a couple weeks to consider if sustainability would be right for him, and if not, nursing would still make a great choice. As soon as they walked out of that meeting, Black turned to Galeskie and asked her to change his major.

“I remember when I heard [former President Barack] Obama say climate change was number one on his priority list, and I sat there and I thought, I think that is my number one, too,” Black says. “My perspective had started to shift. Ensuring that the earth is here for future generations became my priority.”

Now, Black plans to have a career in “green building” – the field which addresses sustainability concerns for almost any type of building at any phase of its life – and earn his LEED (Leadership in Energy and Environmental Design) Green Associates accreditation. This credential means the holder has up-to-date understanding of the most current green building principles and practices, according to the U.S. Green Building Council (USGBC).

An internship with local firm NuStyle Development in Omaha gave Black a look at what a career in green building looks like. In one project, Black looked at an apartment building in which “smart thermostats” were installed to optimize the temperatures in the units. The benefits of this seemed self-evident, but many residents had not learned about the technology. They chafed at the idea of losing manual control of their thermostats, not understanding that it would save them on energy costs.

“What you don’t learn in the classroom is that you have to convince the residents,” Black says, of the benefits and tradeoffs of the new technology that comes with saving energy.

Though Black and most of his classmates may not count themselves in the same generation, he doesn’t hesitate to learn from them. “I pick their minds. I don’t care their age or position; if I don’t understand something, I will ask them to explain it.”

Success as a Habit 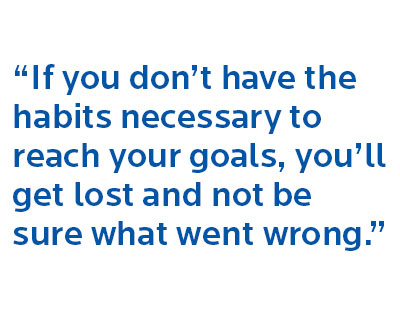 Though the transition from military life to civilian life to life as a student could have been dizzying, for Black, it was easy. The discipline he learned in the military simply shifted to a focus on studying and being fully engaged with his education.

“If you don’t have the habits necessary to reach your goals, you’ll get lost and not be sure what went wrong,” Black says. “If I [had come to Creighton] straight out of high school, I would have flunked out because of my habits. Now, I am happy to end up at this school at this point in my life. I’m fortunate to be in the major I am in with the people I am with.”