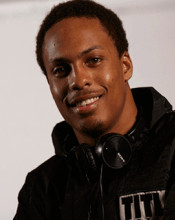 B.A. in International Relations
Class of 2015

Julian McFadden packs a powerful punch in the boxing ring and in 2010 won both the Midwest and U.S. regional Golden Gloves championships. As a senior at Creighton, this 24-year-old international relations major holds down 18 credit hours as well as three jobs, two of them he works late into the night, arriving home at 3 a.m.

McFadden sets his goals high. One goal was to make the 2012 U.S. Olympic team, but when he found out he was going to be a father, he decided to go to school. After attending a community college and a private school, he decided to enroll at Creighton. His 3-year-old daughter is his motivation. He hasn’t hung up his gloves and will be fighting in the U.S. trials to compete in the 2016 Olympics.

McFadden takes a comment from his boxing coach that has helped him with his studies. When McFadden was 19, the coach said, “Boxers never listen.” Even though he thinks the coach was joking, McFadden said the comment turned him into a listener. “That stuck with me,” he says, “and I apply it here.” It seems to be working, as McFadden will graduate in May.

Over the past three years at Creighton, he’s noticed how involved a professor in political science has been in his career. This type of concern was not something he got at the community college. “They’re really invested in my career and are dedicated to my success,” says McFadden. “That was brand new to me.”

Although he knows he will have to start small, McFadden thinks of many ways he can use his international relations degree: the FBI or foreign policy are a couple options he’s considering.