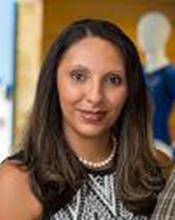 A natural leader with relentless drive, Margarita Caraway has served in the military for the past nine years, while raising her family and completing prerequisites for pharmacy school. In the summer, she also works nights as a pharmacy technician at CHI Health Creighton University Medical Center-Bergan Mercy and cares for her children during the day.

When Caraway was in high school in Junction City, Kansas, she watched her stepmother iron her uniform and shine her boots. Seeing her glow with pride in that sharp uniform left a strong impression on Caraway. Her stepmother encouraged her to join the military, too, and Caraway didn’t need much convincing. Her father (shown) works on base as a nurse, which also seemed like a promising career prospect. To combine the best of both worlds, Caraway decided to enlist and tackle nursing school later.

To gain health care experience, Caraway trained as a pharmacy technician after joining. A self-described “talker,” she immediately loved the opportunity that pharmacy work gave her to talk with people from all walks of life. Caraway deployed just six months after the birth of her first daughter– of course, “it was rough,” she says. Still, she “considered it an honor to care for [the service members] and to hear their stories.” That lasting sentiment convinced her to make pharmacy school her new goal.

“My husband was raised in a Christian home, I found Christ after high school and I just wanted to be in that Jesuit environment,” Caraway says.

Her husband transferred to the University of South Dakota for his final year of college football and stayed to complete his Master of Public Administration. “She supported me when I was in school,” he says, and now it was his wife’s turn to finish her education.

James accepted a position in economic development at the Greater Omaha Chamber of Commerce, and the family moved from South Dakota to Nebraska in time for Caraway to start classes at Creighton in 2016. In fall 2017, Caraway began pharmacy school at Creighton University.

“I didn’t apply anywhere else – I just knew that the way things had fallen in place that I would get in.” She believes that everything that has happened in her life has been orchestrated by God, giving her faith-filled assurance that she is just where she needs to be.

“I haven’t had a bad professor – they’ve all been so accommodating with my schedule.” Chemistry professor Marty Hulce, PhD, was one of the most supportive, she says. When she needed to miss class to fly to her unit each month, he would let her sit at the desk in his office and take tests early or late. Though the professors had an obligation to accommodate her military duties, they were just as understanding of her responsibilities as a parent.

One day, as Caraway walked into organic chemistry, she got a call from daycare. Her daughter was sick and needed to be picked up. Caraway told her professor she would need to take the day’s quiz and then leave right away, and he said it was no problem.

Family has always been a focal point of Caraway’s life. “When I was only three and my brother was two, my dad was raising us on his own while working nights. Then when he remarried, blending the families was crazy with a lot of conflict. I was still the oldest, so I became the ringmaster,” she says with a laugh. “I helped get everybody ready for school and everything.”

Caraway invests deeply in both of her “families.” With her squad, for example, she says, “I encourage them to aim high and achieve in their careers and education. One just got accepted to physician assistant school, and another just got into medical school.”

She’ll probably have standards just as high for her daughters, Maya and Malaya, ages two and four. Caraway’s father completed his bachelor’s degree only later in life, her mother was the first in her family to graduate high school, and her husband was the first in his family to earn a college degree. “I want to start a new pattern of educational achievement in our family,” she says. Through her focus, discipline and vision – characteristic of so many students who have served in the military – she is setting the precedent for that pattern. 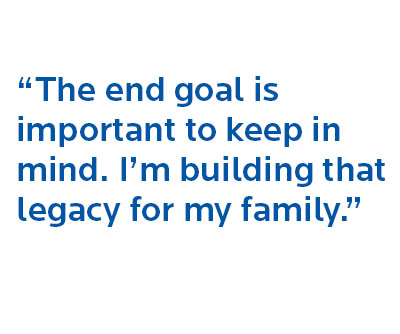 The balancing act of school and family gets tough sometimes: “When I wanted to say I’m done and walk out – the end goal is important to keep in mind. I’m building that legacy for my family. During those 1 a.m. nights and mid-term weeks – you gotta have support and you don’t do it by yourself.”

In addition to support from her family, her faith community plays a part. She attends Lifegate Church in west Omaha and stays involved with the weekly women’s prayer group.

Caraway also takes care of herself by making her health a priority, taking advantage of the fitness centers on campus. “The gym keeps me sane,” she says, and keeps her in shape for the demands she must meet as a service member Her commitment to fitness is also a testament to her toughness – a disabled veteran, Caraway has endured four knee surgeries and a torn shoulder and suffers from epilepsy.

After the four years of pharmacy school (which could take a bit longer if her unit is activated), Caraway’s life won’t slow down. “I will have two careers,” she says without batting an eye: “my civilian career in either a retail or clinical pharmacy – and then a role in the military” – not to mention her job as a parent. She will keep going until she can retire after putting in 20 years of service (her husband James jokes that he will be ready to retire as soon as his wife finishes pharmacy school). There’s no question that she has the drive and energy to get there.

What advice would she give to service member in her squad or even other parents who are completing an advanced degree? “Go after [what you want most] and enjoy life in the process. You can sleep when you’re dead.”