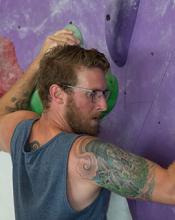 Christenson was working as a manager at retail store Menards when he decided to join the military to travel the world. Christenson enjoyed the camaraderie of the military and moved steadily up the ranks, but the self-described “lifelong learner” felt restless.

“I started thinking about health as I got older and got injured more.” On a snowboarding trip in the Alps, he hurt his back so badly that he had to spend a night in the hospital.

“Then I took a survival class and got the idea in my head that I wanted to learn how to help when something goes wrong,” he says. It wasn’t long until that idea became a full-fledged plan.

From the Base to the Lab

In 2013, Christenson found himself in Bellevue, Nebraska for the second time. He decided to leave the service and enroll as a biology major at Creighton, drawn by the University’s strong record in preparing students for medical school and the availability of the Yellow Ribbon Program. In 2017, he graduated with honors and headed to medical school at the University of Denver.

One of the hardest things about deciding to take this path was realizing that, at 29, he would be 37 by the time that he finished his training. However, that never tempted him to cut corners. “My undergraduate experience prepared me to fully invest myself in what I’m doing, see what my goals are and accomplish them,” he says.

Christenson excelled in lab work – hands-on learning came naturally to him after his military training. He completed 12 credits of research with Dustin Stairs, PhD, professor of psychology which likely bolstered Christenson’s medical school applications (he also majored in psychology).

Christenson says he always has a five-year plan, but allows that plan to deviate as opportunities arise. Right now, his goal is to get on the global health track within his medical school program and ultimately specialize in surgery or anesthesiology. Next, he hopes to complete his post-graduate training through a fellowship in wilderness medicine with the ultimate aim to “provide health globally,” he says unassumingly. The military can provide that opportunity, so he has committed to re-enter after his medical training.

In one way or another, he plans to combine all his passions with his profession. A lover of the outdoors – he can’t wait to rock climb in Colorado – and animals, especially his dog and two cats. After completing 20 years in the military, he hopes to travel the globe offering medical care in small countries –  maybe in Central America, Iceland or New Zealand.

This world traveler says one thing he learned at Creighton was “a greater understanding of the condition of the world, of different cultures.” His professors might call this formation in the Jesuit tradition. Christenson says, “I am simply a better human, I appreciate people a lot more now, with all their quirks and differences.” Surely these qualities will serve him in his medical practice and his travels.

Christenson says he felt a bit daunted when he returned to college four years ago, so he offers this advice to those who too are returning to the classroom. “Know the requirements, know the rule book – you can wing how to accomplish it, but find out what you need to do and do it” – for example, keeping track of deadlines and assignment details, he says. “Take it step by step and do what you can, and it ends up working out.”