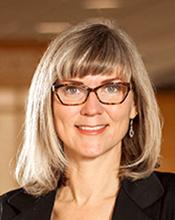 While studying at Creighton, Tammy Williams, BA’09, exemplified the role of a working professional seeking to complete a degree with dedication to serving others. Williams joined the Creighton community in 2006 in the newly formed AcceleratedCREIGHTON Organizational Communications degree program.

At Creighton, Williams served as a mentor to her peers and a student advisor to the College to advance the presence of Ignatian values within the program. She graduated summa cum laude with a B.A. in organizational communication in 2009. In 2014 she was among the inaugural inductees into the Nu Tau Epsilon chapter of Alpha Sigma Lambda Honor Society, recognizing adult learners’ dedication to scholarship while balancing multiple demands of home and work life. She is currently the director of communication and external relations at ConAgra Foods and is the recipient of numerous professional awards, including the American Advertising Federation’s National Gold ADDY ® Award; and the Best in Show, American Marketing Association.

Williams’ community service focuses on programs supporting children and the homeless and she has been actively involved in the community with area nonprofit and community organizations. In 2011, she and her husband, John, were the visionaries behind the formation of the Hanscom Bark Park, Midtown’s off-leash dog park, and recipients of the Mayor’s Neighborhood, Mutual of Omaha and Peter Kiewit Foundation community grants for the creation of the dog park. As a leader in community relations at ConAgra Foods she has played a pivotal role in the annual ConAgra Foods and community’s Shine the Light on Hunger fundraising campaign benefiting Food Bank for the Heartland.

For her service and commitment to both Creighton and her local community, Williams received the 2015 College of Professional Studies Alumni Merit Award.